The control of air movement, or airflow, during mold remediation is one of the most important and easiest overlooked factors of a successful mold removal project. When building owners or tenants discover suspected mold growth in their homes or businesses, they usually don’t know the proper steps for safe and effective mold removal. Improper removal activities can lead to ingestion of dangerous levels of mold spores or cross contamination of otherwise unaffected areas of the building. For significant mold growth, a competent professional should be consulted. However, in some cases, where there is a very small amount of visible mold, the homeowner may not feel it is necessary to hire a qualified mold remediation company. This could be either due to budget constraints or their possessing prior construction experience.

Often, the questions that arise are more related to cleaning versus removal of contaminated materials, and cleaning product questions.

Containment barriers and controlling airflow are two of the most important aspects of a mold remediation plan.

Pre-testing can be an important component to establish baselines as well as to determine the levels of cross contamination caused by spore migration. Pre-testing should be completed by an Indoor Air Quality (IAQ) professional, and may consist of both a visual inspection and of air or surface samples being collected. A laboratory would then analyze the samples to determine the type of mold present, and concentration levels. This will allow the IAQ professional to establish in their remediation plan to either include or eliminate areas in the building from remediation cleaning needs. Most IAQ experts will develop a scope of remediation (the step-by-step process to be followed by the remediation contractor) based off of the data collected from the pre-testing. A qualified remediation contractor, by following the scope, will have the greatest success in returning the building to a normal fungal ecology (safe levels).

If the mold source is visible and relatively small, and the spore migration is not extensive, the affected area might only consist of a small area. This area might be just a few rooms or maybe the tests will determine, for example, that just the basement is affected. Effective containment barriers as well as utilizing HEPA AFDs (Air Filtration Devices) to manage airflow will protect the unaffected areas of the building and assist in capturing any mold spores that are disrupted during the remediation process. Proper containment and managed airflow are essential tools in protecting the residents and unaffected areas of the building during the remediation process.

Three types of air pressure are discussed here that will manage airflow: Negative Air Pressure, a technique where the air is exhausted out of a space creating a negative pressure environment. Positive Air Pressure, a technique where air is directed into a space to positively pressurize the space and therefore prevent air “leaking” into the space from other areas. Neutral Air Pressure, where airflow is contained to a specific space, normally used when outdoor air is undesirable or access to outdoors is not practical. 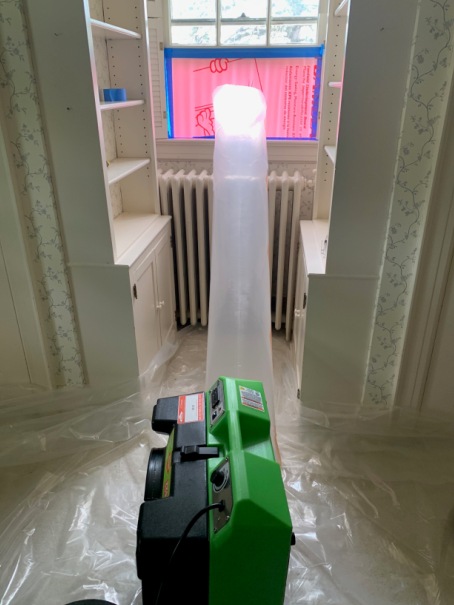 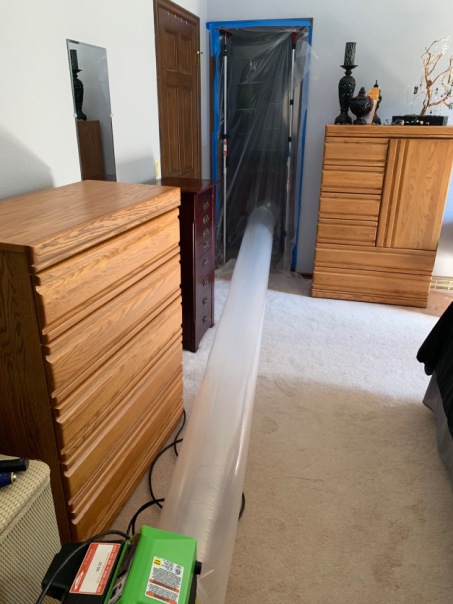 Negative air pressure is extremely important in a mold remediation project. Hospitals use these concepts to isolate quarantine areas and prevent cross contamination, due to infectious diseases. Establishing negative air pressure in a space is relatively simple in concept. Simply remove more air out of a space than is provided into the space. The resulting negative pressure will prevent airborne mold spores from traveling past the containment into the unaffected areas of the building.

Setting up this negative air situation in your home or building consists of placing one or more containment barriers, usually consisting of 4-6mm polyethylene sheeting between the affected and unaffected areas and exhausting sufficient air to achieve 4 air changes per hour or one every 15 minutes. The containment barrier is not intended to be an airtight seal, it will simply restrict the passive airflow (replacement air), causing the desired negative pressure situation.

There are instances when the outdoor air is not acceptable for ventilation. Negative or Positive pressure environments are not viable. Both negative and positive pressure will utilize outdoor air as replacement air. When conditions do not warrant using outdoor air as replacement air, neutral airflow with HEPA Air Filtration Devices are one of the only options. In that case, containment barriers should be set as tightly as possible between affected and unaffected areas. HEPA AFDs should be placed inside the remediation area (affected area) with adequate CFM (cubic feet per minute) capability to perform at least, 4 air exchanges per hour in the remediation area. Additional HEPA AFDs (also set in neutral airflow) can be placed outside the containment in the unaffected areas in an effort to capture any spores that might inadvertently escape the affected containment area.

Regardless of which method is used during the remediation work, the containment barriers should be encapsulated and disposed of after the remediation has been completed. The project should then remain under neutral pressure HEPA air scrubbing (at min 4 ACH) for an additional 24-48 hours.

Once the HEPA AFDs have been removed, the building should be allowed to acclimate for an additional 24-48 hours before Post Remediation Verification (PRV) testing samples are collected. Testing should include not only the areas of the building that were remediated, but should include the previously unaffected area. The results from these PRV samples will indicate if the affected areas of the building have returned to a state of normal fungal ecology and confirm that the protective containment and airflow efforts were effective in guarding against cross contamination during the remediation project.

Keep in mind, this article only addresses a small part of the complicated mold remediation process. Other issues such as environmental controls, proper personal protective equipment and numerous other factors should be considered. Most published recommendations state that visible mold in excess of 3 square feet should be remediated by a qualified professional. In reality, the contamination in a home or business will also include airborne mold spores that need to be addressed. For that reason alone, you should strongly consider consulting with an indoor air quality professional that will recommend controls, including airflow, as part of a remediation plan specifically developed for your project. You can follow this link to get a list of IAQ Testing Professionals in your area. A qualified mold remediation contractor can then use that plan to most effectively return your home or building to normal fungal ecology. You can follow this link to get a list of pre-qualified mold removal professionals in your area.

Return From Airflow During Mold Removal To Our Main Remediation Page

Robert S. Vohl, CIE, CMI  manages MB Mold & Air Quality Testing, which was founded in 2004 and is based in Dubuque, IA. They are Council Certified by the ACAC with designations including CIE (Certified Indoor Environmentalist) and CMI (Certified Microbial Investigator). They specialize in mold and air quality testing. 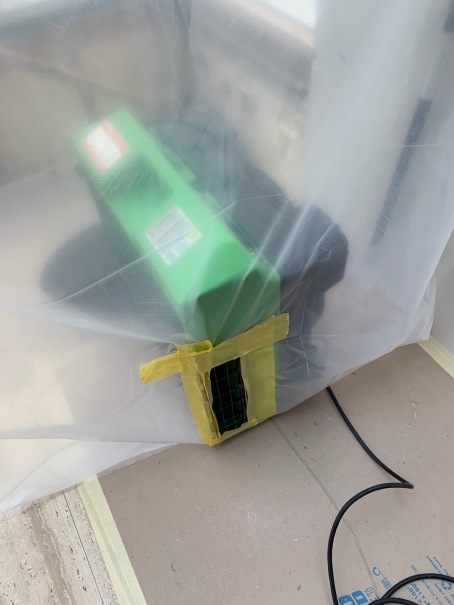